This text was published with the permission of the late John Waddell, a former Snape Village Recorder.
It was written several years ago, but is now followed below by an article by his successor.

THE HISTORY OF SNAPE: OVERVIEW

The History of Snape, which was touched by both the Roman and Norman conquests, can be traced back for over 2,000 years.  It was, in its time, a more significant place than Aldeburgh, which now substantially outranks it in size.  Although internationally known from the fame Benjamin Britten brought it, it can also be credited with pioneering two agricultural revolutions, and hosting a horse race meeting for almost 150 years.  The Romans lived nearby.  They evaporated the waters of the River Alde to produce salt, and traces of their salt pans were found at Snape in the last century.

Anglo-Saxon Snape achieved a greater significance as a burial place which may well have been used by the rulers of East Anglia, the Wuffings [most likely of Sutton Hoo fame], whose palace was nearby at Rendlesham.  Excavations in Snape have uncovered many graves and two boat burials, dating from about the middle of the first millennium, on a site now bisected by the road to Aldeburgh.  A fine gold signet ring, illustrated right, was found, among other artefacts, in the boat burial uncovered in 1862.

Archaeological clues also indicate that the original village was centred on the higher ground in the area now dominated by the church.  Whether the movement of the population towards the river was the result of plague, politics or providence has yet to be determined.  Certainly a church existed at the time of the Norman conquest.  In the Domesday Book of 1086 it was recorded as standing in eight acres [3¼ hectares] and valued at 16 pence — which, by the standards of the day, was not as dismissive as it sounds.  The present building, shown here, dates from the 13th century.  The tower was built as the result of a bequest in the middle years of the 15th century, and the battlements added later, in the style of the 1520s.  The porch is contemporary with the tower.  The roofline on the tower shows that it was once thatched. The nave and chancel are earlier, probably 13th century, and although they have been patched up over the years, there has been no wholesale rebuilding.

Even at the time of the Domesday Book, Snape must have had a population of over 100 people — the book records the existence of 49 men who together with their families would have made a reasonably sized village for the time.  The population was further increased when the Snape Priory was set up near the river by a local landowner, William Martell, before he went off to the Third Crusade.  It lasted, despite a somewhat chequered history, from 1155 until 1525, when Cardinal Wolsey closed it and stripped its assets to use, at least in part, to set up Ipswich School.  All that remains of it is a magnificent barn, now part of Abbey Farm on the same site, built by monks and carbon-dated to 1295.  Probability suggests it was the monks — who constructed their own water mill — who also built the first bridge across the Alde.  It was certainly wooden and by 1492 sufficiently in need of repair for the then Bishop of Norwich to give permission for alms for that purpose to be sought from travellers.

The main traffic from London going north, which is now carried by the A12, went for centuries by way of Snape Bridge.  The present 1960 construction succeeded a red brick hump-back bridge built in 1802 — still remembered with affection, but more suited to the horse than the internal combustion engine.  The bridge, being the first point at which the River Alde could be crossed without getting wet, inevitably became associated with smugglers who needed to move their goods across it.  The Crown public house has a dormer window facing south which was supposedly used to signal the all-clear once the militias were in the bar below seeking refreshment.  The Crown also had a role in the great attraction which brought crowds from London to Snape in the 18th and 19th centuries, long before the Maltings concert hall produced a similar influx.

The Snape Race Course on the banks of the Alde hosted a race meeting every year for the best part of 150 years.  Entries were made at the Crown or the White Lion in Aldeburgh.  The map shows the situation of the racecourse at the end of a long avenue of trees stretching from Friston Hall, when it was occupied by the Earl of Strafford.  Racegoers, at least after 1785, were able to arrive via the new road (the present A1094) which was built by the Aldeburgh Turnpike Company and made Snape more easily reached.  [A more detailed, recent article about the Race Ground can be viewed here.]

The road's importance was not challenged by the railway.  Although a branch rail line was put through to Snape in 1859, it was only ever used for goods traffic to the Snape Maltings.  The River Alde played a more significant part of Snape's development than the railway.  As a small inland port, with the growth of the Snape Maltings it was, by the end of the 19th century, also a remarkably busy one.  It was by Thames barge from the port that, a hundred years ago, a significant cargo was sent to Holland.  Sugar beet had not been successfully grown in this country before but a crop, planted on the field between the Crown and the river and shipped to the Netherlands for processing, proved that it could be made to pay.  It was soon to become a staple of East Anglian farmers.  If Snape played its part in that farming revolution it had already played its part in another.

The village had three windmills in the 19th century.  At one, Hudson's mill — which after it closed in 1933 was occupied by Benjamin Britten — the first experiments were conducted which led to what has been called The Suffolk Gold Rush.  A Saxmundham bone merchant, Edward Packard, conducted the initial experiments there which led to the treatment of coprolite so that it could be spread as a fertilizer.  Coprolite, largely consisting of Tri-Calcium Phosphate, was to be found in a strata of local crag.  For the second half of the 19th century fortunes made as coprolite sold for £2.10s a ton and an acre of land in the right place could produce 300 tons.  Although better fertilizers were eventually discovered, Edward Packard, made prosperous by his process, set up a firm with two partners which eventually became Fisons.  Snape, which as remarked earlier, probably had over 100 inhabitants in the 11th century, was slow to expand and four hundred years later had only grown to 485 souls.  Yet as, at that time, it shared its own rotten borough Member of Parliament for "Snape-cum-Aldeburgh", significance rather than size was obviously the criterion applied.

In 1870-72, "SNAPE, a village and a parish in Plomesgate district, Suffolk.  The village stands near the river Alde, 3½ miles S by E of Saxmundham r. station; bears the name of Snape-Street; and has a post-office of the name of Snape under Saxmundham. The parish contains also the hamlet of Snape-Bridge, which has a horse fair on 11 Aug.  Acres, 2,100.  Real property, £2,219.  Pop. 554.  Houses 124.  Snape House is the seat of J. Scarlett, Esq.  A Benedictine priory, a cell to Colchester, was founded here, in 1099, by W. Martell; was given, by Henry VII, to Butley abbey; went, at the dissolution, to the Duke of Norfolk; and is now a farmhouse.  A branch railway, for goods only, comes to Snape-Bridge.  There are two barrows.  The living is a vicarage, annexed to Friston — The church has a rich later English nave, and a Norman tower; and was restored in 1864.  There are a national school, and charities £6." — John Marius Wilson's "Imperial Gazetteer of England and Wales"

FROM OUR VILLAGE ARCHIVIST ... 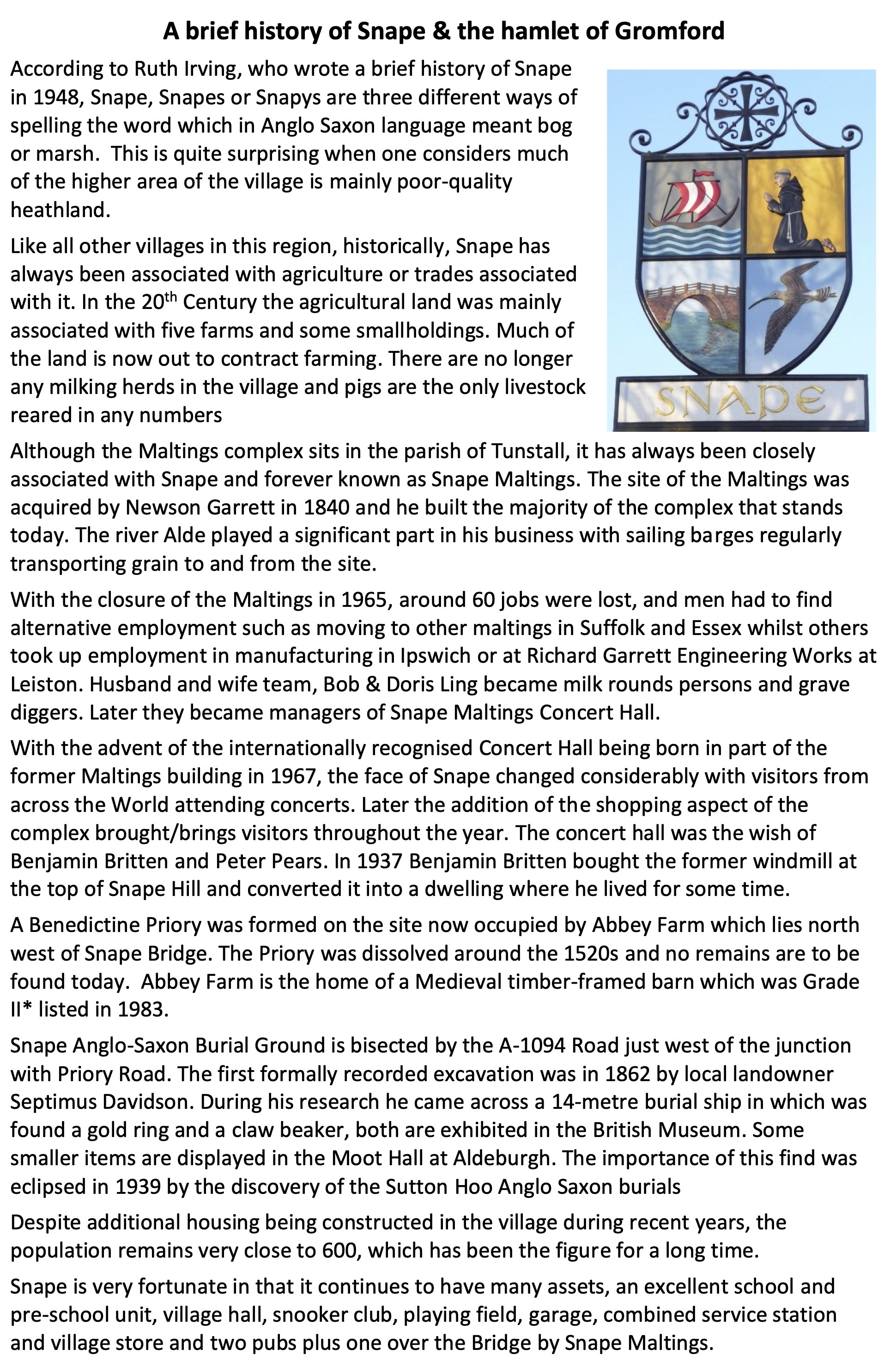 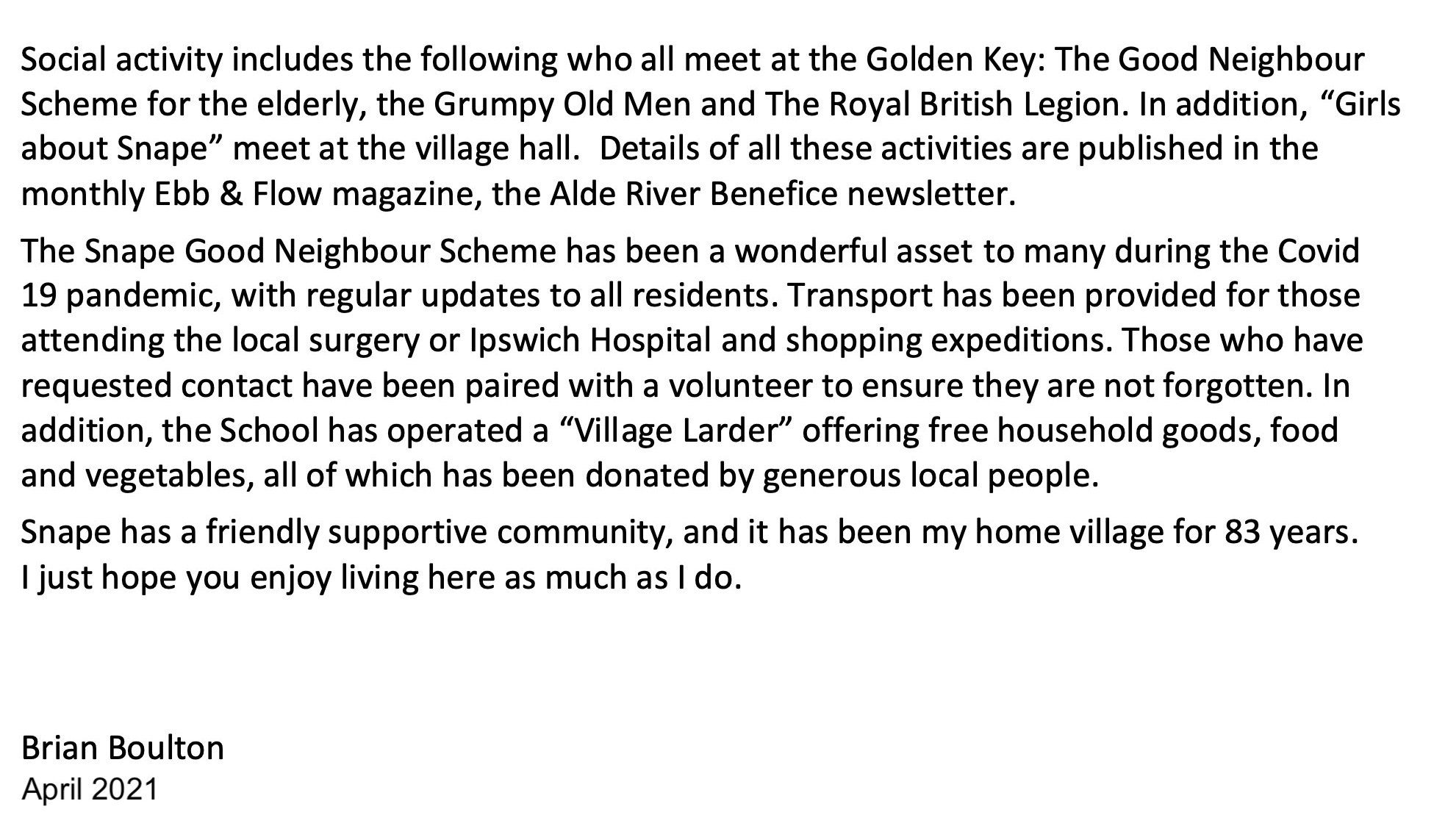