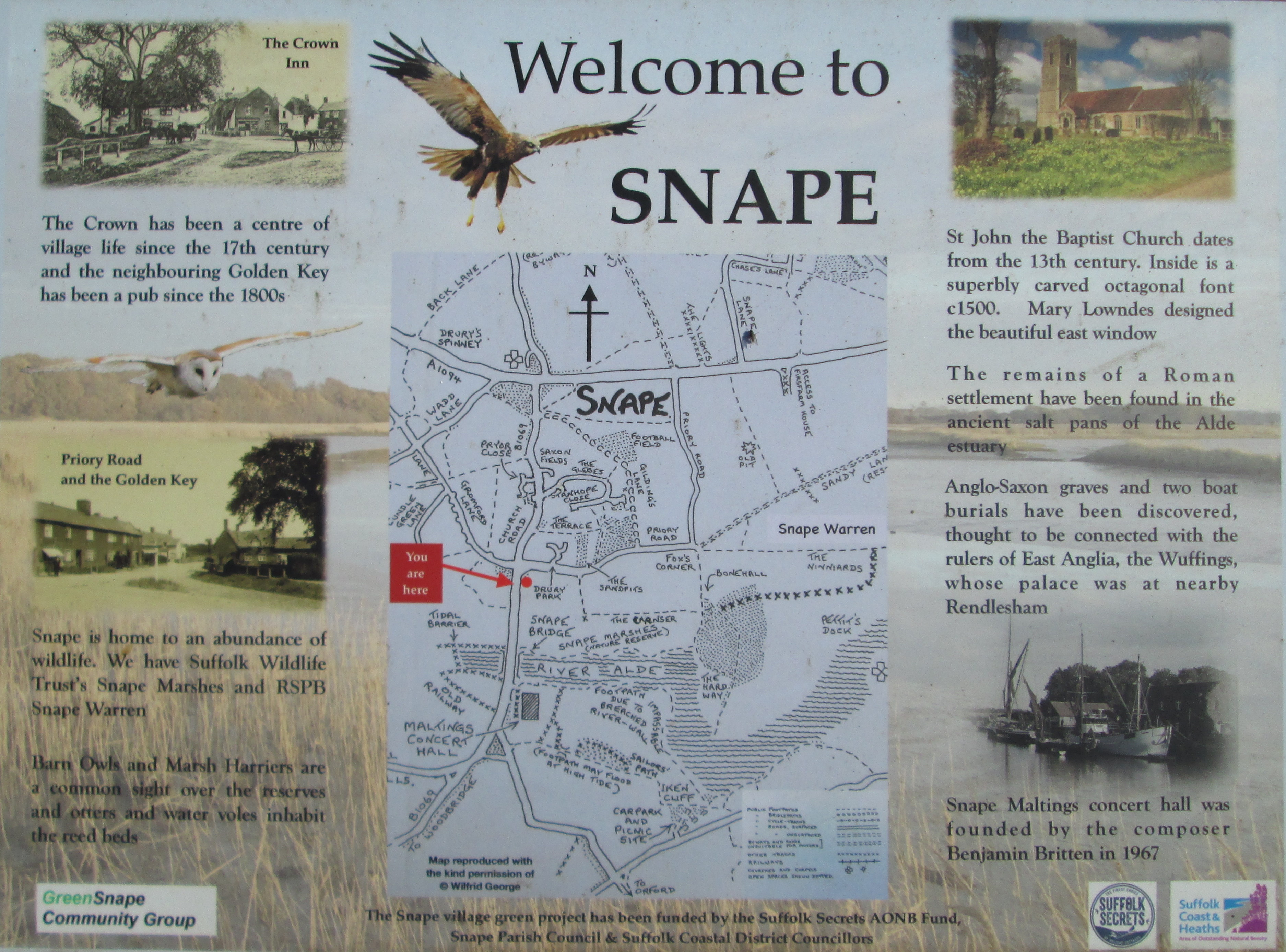 The panel above is on the village green, which was refurbished in Spring 2019, outside "The Crown" pub.  Read about the panel's unveiling here.

SNAPE is located in a picturesque setting  on the north of the River Alde, five miles from the North Sea coastal town of Aldeburgh.  Set in an Area of Outstanding Natural Beauty (AONB), often portrayed by views of the famous Maltings Concert Hall with its backdrop of the marshes, the parish comprises around 380 households within 1700 acres (700 hectares), of which about 300 (120 ha) are open heath and common land.  The village has a rich history that includes the site of a Saxon burial ship, discovered in 1862 and dating back to [around] 650; it is also listed in the Domesday Book survey ordered by William the Conqueror in 1086.  By 1155 the village had a Priory built by William Martell, a local landowner, who later took part in the Third Crusade.  The Priory remained open until 1525 when Ipswich's Cardinal Wolsey closed it and stripped its assets to use, at least in part, to set up Ipswich School.

The already thriving port at Snape was bought by the Victorian entrepreneur Newson Garrett in the 1800's and he built what is now the world famous Snape Maltings for the malting of barley.  Produce from the maltings was sent on barges to London and exported to mainland Europe but, after 120 years, they ceased operation and by 1965 the buildings had fallen into disuse.  Benjamin Britten lived in Snape for a time; it was when he was here that he wrote much of his first opera, "Peter Grimes".  In 1948 Britten established the Aldeburgh Festival which, by the early 1960s, had grown to such an extent that Britten sought to establish a concert hall for it.  This led, in the mid 1960's, to the lease and conversion of the largest malthouse in the now redundant maltings complex.  Snape Maltings Concert Hall was opened by the Queen in 1967, and again in 1970 following a disastrous fire on the first night of the previous year's Aldeburgh Festival.  Along with the Festival, it has since established a world class reputation. Today Snape Maltings is a popular visitor site, home to a range of fashionable shops, galleries, restaurants, Aldeburgh Music’s creative campus and, of course, the beautiful Concert Hall.