originally posted on 3rd October, 2016:  These articles were researched and produced by Roger Horton, a former owner and resident of The Mill.

A similar, much shorter, article can be seen at http://www.oldmillsnape.co.uk/thebrittenyears.shtml.
Incidentally, there is an excellent article about Benjamin Britten's life at https://peoplepill.com/people/benjamin-britten/.

A mill has stood on this site since at least 1688 and possibly considerably longer, certainly the high ground overlooking the river catches the wind to provide ample amounts of motive power.  This particular post mill with brick roundhouse and wooden sails was constructed in 1797/8 by Thomas Butcher of Wickham Market for William Ship and John Hunt of nearby Parham at a cost of £210/0/0.  It seems William Ship died in the very early 1800’s, because all the remaining documents are in the name of Mary Ship and bear her mark in the form of a cross, until she disappears from the documentation in 1855.  Following this short history is a list of the documents still surviving which includes leases, sub-leases and mortgages (in those days arranged from private individuals and formalised at the Courts Baron for the Manor of Snape).  There are also some receipted solicitors’ invoices from the late 1800’s when the daily fee seemed to be around two to three guineas, and the railway fare from Saxmundham to Wenhaston 2/6d — this would have been travelled partly on the old Southwold Railway, closed in 1929.

The modest miller’s cottage and granary were constructed at the same time, and a Norwich Union fire insurance policy exists dated 1801 which insures the windmill, working gear, granary, stock and “his new dwelling house and chattels” at £550/0/0 for an annual premium of one guinea! Interestingly, another policy dated 1884, when additional buildings had been constructed, shows a sum insured of £500/0/0 for an annual premium of £1/16/4.  Negative building cost inflation in those days it seems!

The mill worked through various owners producing fine white flour and, in the middle of the 19th century, was also used for the grinding of coprolite, a phosphate rich material found under the abundant crag deposits locally, to produce an artificial manure.  The material was discovered by Edward Packard, a Saxmundham chemist, who subsequently built his own mill near Ipswich and went on to become a founder member of Fisons.  In 1897 the mill was purchased by Harry Hudson from the widow of Joseph Lee.  He worked the mill until he sold it in 1925 and, since that time, it was known as Hudson’s Mill. 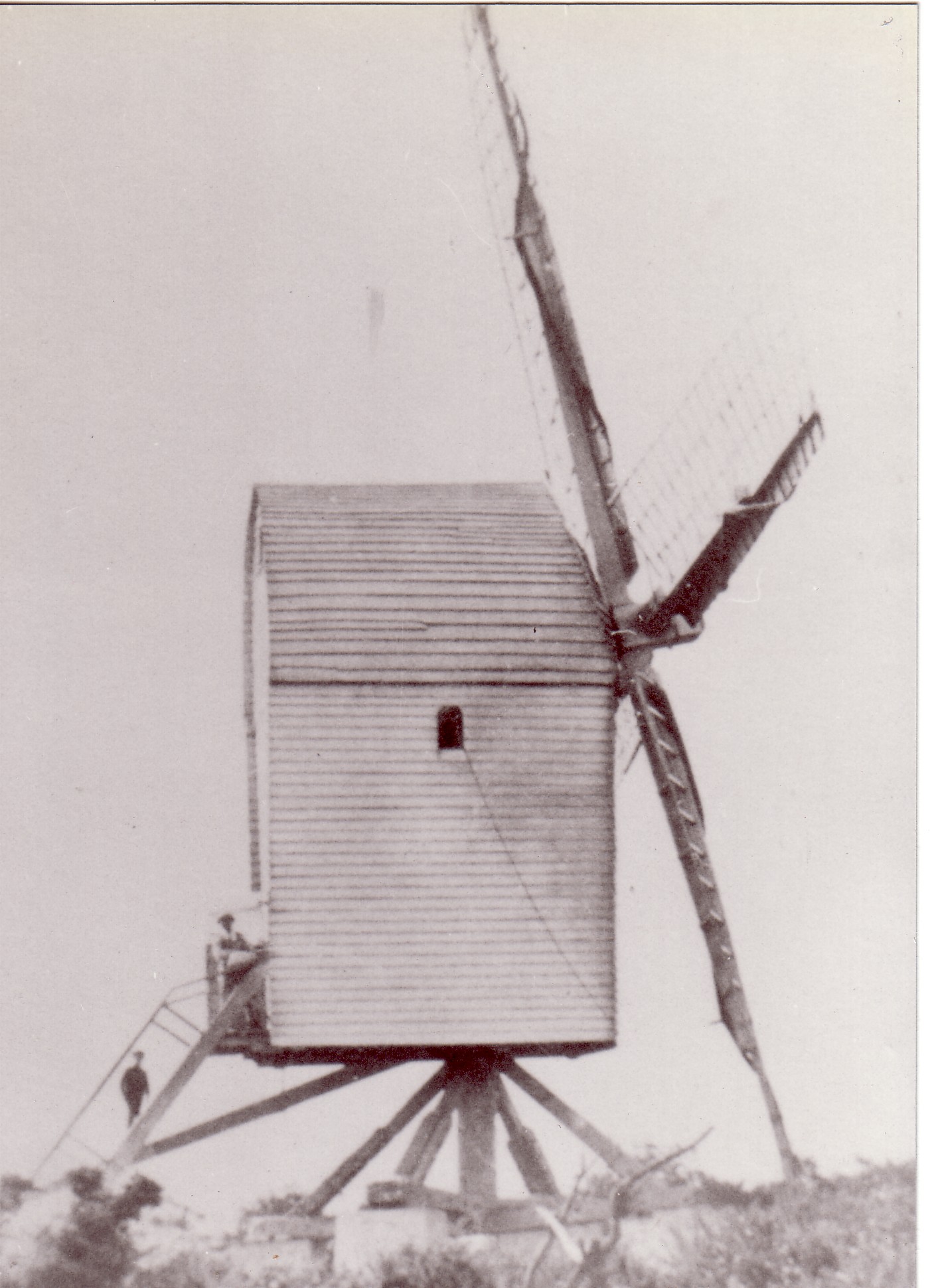 There were two other mills in Snape, Markin's Mill (shown left), with an open trestle bottom and cloth sails, ... producing brown flour, built in 1800 and demolished in 1922 — and a smaller cloth-sail mill ... used for turning a wood lathe.  [This latter was known as the Turning Mill, demolished c.1828, and is listed on a Suffolk windmills website at Grid Reference TM 403 584, placing the site behind "Snape Cottage", which is beyond Foxes Corner.  The more recent Markin's Mill was situated at what is now "The Stables" off Priory Road, formerly known as Sandy Lane — it is still shown on the 1950s Ordnance Survey 1" map (see foot of this webpage), although it had been demolished two or three decades before.]

With competition from mechanised roller mills increasing, the traditional millers were finding life difficult and, it seems, in common with many other windmills, the sails were removed and an oil engine was installed to provide more constant motive power to drive the stones.  This was not sufficient to save the mill and grinding ceased in 1933.  The buck was later dismantled by John Brown of Leiston but the stones were stored in the roundhouse until 1936, when the runner (upper) stone was taken to Saxtead Mill — this mill is preserved by English Heritage and is open to the public. 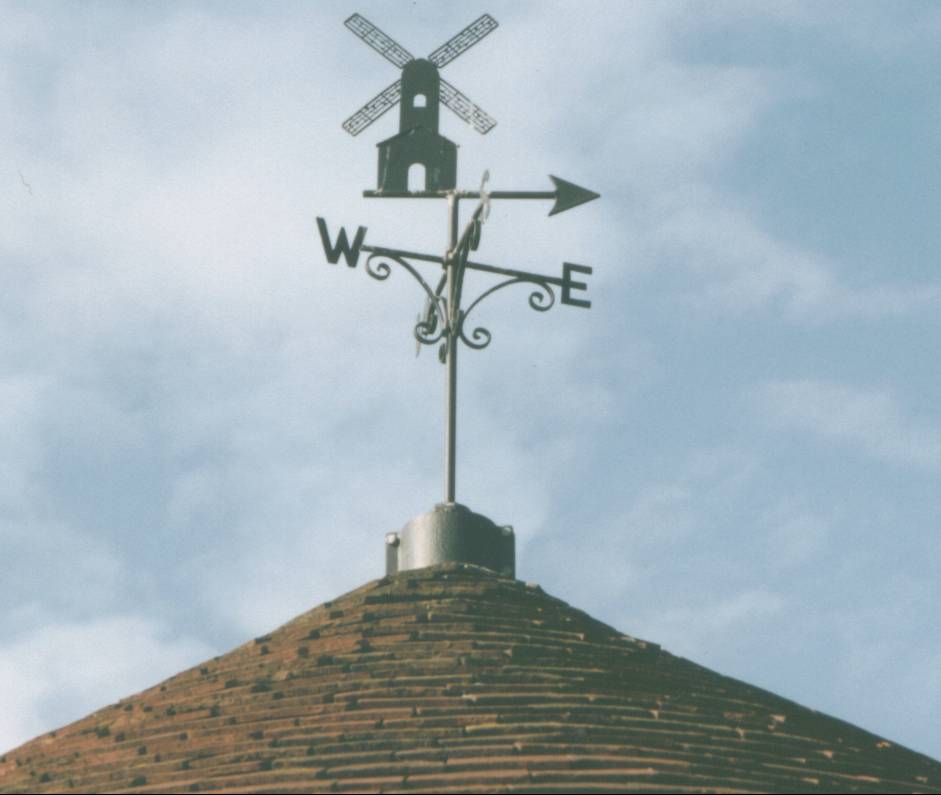 In 1937, the mill and outbuildings were purchased by Benjamin Britten and converted into a house.  [He] moved to Aldeburgh in 1947, and let The Old Mill initially to a Mrs June Billows for a monthly rent of £8/6/8.  Other tenants resided in the property until 1955, when Britten sold it to Mr and Mrs Philip Terry as a holiday home.  Mr Terry was a solicitor with a London firm, while Mrs Phylis Terry, née Whiteman, was an artist who illustrated children’s books.  Up until 1970, the Old Mill was used as a holiday home or let to various people including some teachers stationed at the nearby American air force base, RAF Bentwaters.  The Terrys retired to permanent occupation in 1970, until Mrs Terry died in 1998 after surviving her husband by some eight years.  The Old Mill was purchased in August 1999 by Jane and Roger Horton and very extensive renovations and refurbishment were carried out.

The original plans for Britten’s conversion show a weathervane on the central post.  This was never fitted until the Hortons commissioned Peggs of Aldeburgh to make the weathervane shown, depicting the Mill with the sails in the form of musical bars and notes denoting the two past uses of the building.

BRITTEN YEARS AT THE OLD MILL

The Windmill ceased working around 1933 and was purchased by Benjamin Britten in September 1937 for the grand sum of £450, using a £2000 legacy from his Mother who had died earlier in the year.  The sails, buck and working gear had already been removed and the three foot six inch diameter runner (upper revolving stone) was taken to Saxtead Green Mill to replace the four-foot four-inch diameter stone there, in order to lighten the load.

Luckily, Britten’s sister’s future father-in-law was an architect, Arthur Welford who lived at nearby Peasenhall Hall, and he offered to design the conversion free of charge to assist the young composer.  The main requirement was for a large working studio which was accommodated on the ground floor of the existing roundhouse.  With the prominent position on the hill and magnificent southerly aspect over the village, the tidal river and the working maltings, the roof was raised to provide a bedroom with a recessed balcony and window traversing one third of the circumference to take advantage of the view.  The existing single-storey cottage formed a kitchen, living-room and two further bedrooms, whilst the adjoining granary was converted into another studio for Britten’s fellow composer, Lennox Berkeley (1903-1989).  The two had become firm friends since meeting in Barcelona in 1936.  The rent from Berkeley assisted with the finances.  The roundhouse and cottages were linked by a timber-framed single-storey extension, housing a boiler room, fuel store, bathroom and shower room.

Although open fires were constructed in the principal rooms, the architect advised central heating also be installed throughout, and the original cast iron radiators have been refitted in the recent refurbishment.  Britten was certainly ahead of his time in having a shower installed in 1937 in England.  Works were complete at the end of April 1938, and the composer moved in to “this quaint old village”, as he described Snape in a letter to a friend.

A feature on the conversion of The Old Mill appeared in the December 1947 edition of Ideal Homes magazine.  Setting aside the journalistic inaccuracies regarding the building, there are some fascinating photographs showing the rooms with the original furnishings including “an unadorned chaff sieve mounted on a pedestal [that] could hardly be bettered as a letter tray”.

Once ensconced in his new home, Britten entertained many of his artistic friends, including Peter Pears, Wystan Auden and the American composer Aaron Copland who describes his visit in the book “Tribute to Benjamin Britten on his Fiftieth Birthday”, published by Faber in 1963.  Britten’s sister Beth had married Kit Welford, a medical student, in January 1938 and they also made their home at The Old Mill when not in London.

In May 1939, Britten and Peter Pears followed the example of W H Auden and left England for America where he continued composing, spending most of his time in Amityville.  The Norwich Union insurance policy for the Old Mill and contents dated 1940 is endorsed “The Insured is at present residing in the United States of America”.  In late 1941 the decision was made to return to England but, being wartime, a passage across the Atlantic could not be obtained until March 1942 in a small Swedish cargo ship.  Britten used the month-long crossing to compose “Hymn to St Cecilia” and “A Ceremony of Carols” — the current CD cover of the latter shows Britten on the balcony at The Old Mill.

Once returned to England, Britten was accepted as a conscientious objector and appeared at wartime concerts as a pianist all over Britain and continued composing.  He had been considering basing an opera on George Crabbe’s poem “The Borough”, but the complexity of the composition would rule out any other work and therefore income for a considerable length of time.  The conducter Serge Koussevitzky was sufficiently interested in the project to donate $1000 from his Music Foundation for the opera.  Thus “Peter Grimes” was begun in January 1944, completed in February 1945 and was first performed on 7th June 1945 in the newly re-opened Sadler’s Wells Theatre, with Peter Pears in the lead role.

Other important works composed during Britten’s time at The Old Mill include “The Young Person’s Guide to the Orchestra”, the opera “The Rape of Lucretia” and the comic opera “Albert Herring”.

In 1947, Britten moved from The Old Mill Snape to Crag House, Crabbe Street, Aldeburgh from where he, with other friends, established the Aldeburgh Festival in 1948.  He continued to own The Old Mill, letting to tenants until 1955, when it was sold to Mr and Mrs Philip Terry as a holiday home.  During his residence at The Old Mill, Britten’s success was demonstrated by his transport, the second hand Morris Eight that he and friends used to trundle around the Suffolk countryside when he first moved in had been exchanged for a Rolls-Royce.

During the latter part of its working life, the mill had been known as Hudson’s Mill, after Harry Hudson who purchased it in 1897.  By coincidence, Britten’s housekeeper at the Red House in Aldeburgh was a Miss Hudson, who was Harry Hudson’s niece.

Twenty years after his departure from The Old Mill, Britten saw the opening of the new concert hall home for the Aldeburgh Festival in the maltings complex that he used to look out on from his bedroom.  As with his former home, changing economic and commercial circumstances had forced the maltings to cease operating, but the lovely old building had been found a new use, in this case as a world famous musical venue.

Also with thanks to the staff at the Britten-Pears Library  [The Britten-Pears Foundation has an excellent display about The Old Mill in the Gallery at The Red House in Aldeburgh.  This was Britten's subsequent home (after Crag House) from 1957 until his death in 1976, and is now open to the public as the setting for an archive of his work, for exhibition spaces, and as a centre for music research.  For further information, visit https://brittenpears.org/visit/whats-here/ .] 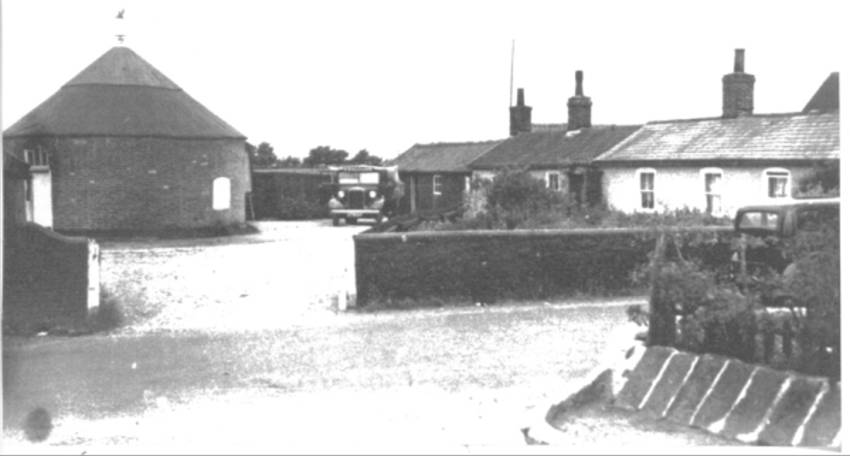 The Old Mill just prior to conversion 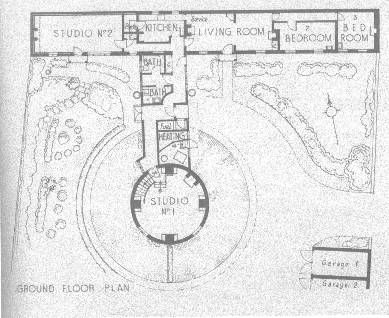 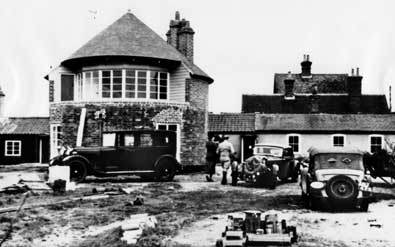 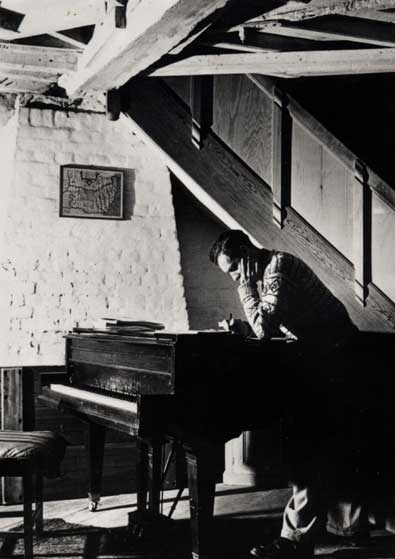 Britten composing at The Mill 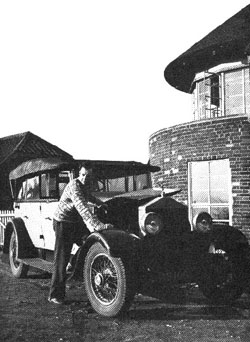 Outside the Mill with the Rolls-Royce

These are placed in the Suffolk Record Office